These days, there’s an increased popularity in “Spot the Difference” photos.  You see them on the internet, in Facebook, in popular magazines—at first glance the photos seem identical.  But look closer, and there are some real differences.  One shirt has five stripes instead of six, one girl has freckles and the other doesn’t.  Well, if you put an OEC 9600 C-Arm next to an OEC 9800 C-Arm, you’d be hard pressed to be able to tell the difference.  The frame is nearly identical.  The size and weight are the same.  Even most experts can’t tell the difference at first.

So you start looking a little more closely.  The steering mechanism is also exactly the same between the two, except for the first OEC 9600 produced between 1994-1995. Those were produced with straight steering, which made it extremely difficult to maneuver.  But the vast majority of ones currently in the marketplace have identical steering mechanisms to the OEC 9800.

When you look at hardware configurations on both models, the differences aren’t easy to see.  They both come with a 9-inch or 12-inch tri-mode Image Intensifier.  And both C-Arm models come with a 9-inch Super C option.  There is one difference though—the 9800 features one additional configuration.  It’s the MD “motor driven” configuration, which allows you to electronically control the movement of the C-Arm.  This, as you know, can come in handy.

The answer is really up to you.  You’ll pay 30-40% less when you buy an OEC-9600 instead of a 9800.  So you might get a little less convenience without the touch screen, but it sure can help your bottom line.  And that can make the “older sister” a whole lot more attractive to your budget.

Of course, the best way to determine which C-Arm is right for you is to talk to a C-Arm expert.  We’ve got lots of those at Atlantis Worldwide, and they can help you weigh the pros and cons—or freckles or stripes—of the 9600 and 9800 so you can make the right choice for your facility.

Call Alex Silbergleit for your C-Arm Needs at 800-533-3356 or email alex@atlantisworldwide.com 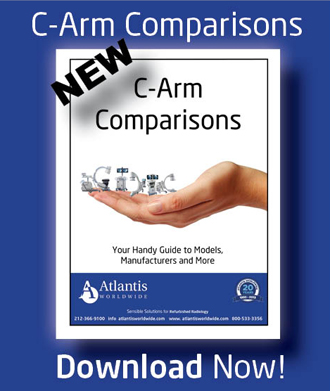