As we head into breast cancer awareness month and all things pink, it’s a good time to learn more about the equipment that is used to identify breast cancer. Unfortunately, it’s not always easy to detect breast cancer during a mammography procedure. Sometimes the cancer is hard to see because it blends into breast 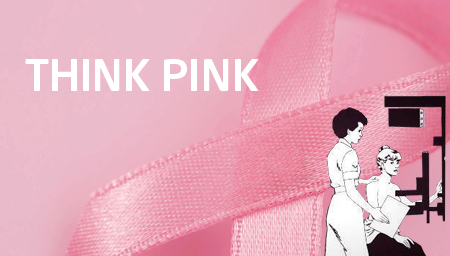 tissue. The good news is, over the past 15 years there have been great advancements in digital mammography technology—especially in the ways that cancerous cells are located during a procedure. Computer-aided detection, or CAD, has almost become a standard addition to most mammography systems.

But let’s back up for a minute. Just fifty years ago, it was widely believed that a computer could never beat a human at chess. Eighteen years ago IBM’s Deep Blue computer beat world chess champion Garry Kasparov. Computer technology has advanced and can help us “mere mortals” make fewer mistakes and yes, detect cancer more often. Using a CAD computer dramatically increases the physicians' ability to identify subtle abnormalities and more importantly, potential breast cancers in earlier stages.

When a CAD computer is linked to a mammography, it helps radiologists investigate images to find any irregularities in the breast tissue.  After the mammogram, the resulting image is sent to the radiologist for review. The image also goes into the CAD, which reads it and forms an opinion. The radiologist compares his opinion to the CAD's and bases the final diagnosis on a "double reading" of results.  In laymen's terms, CAD acts like a "Spell-Checker" for medical images and assists radiologists by highlighting areas that warrant a second review. CAD systems have been shown to increase breast cancer detection rates by 15 percent—and up to 15 months earlier.

There are currently two CAD systems that are most commonly used on the market: the iCAD Second Look and the R2 Image Checker. While there have been studies conducted to determine which CAD system is superior, the differences have proven to be negligible. The only real difference is that R2 CADs have a slightly lower frequency of false-positive results. It’s good to note that iCAD is normally used with GE systems while the R2 CAD is used with Hologic, so keep that in mind when selecting your CAD system.

If you’re in the market for a CAD or Digital Mammography system, remember you have lots of choices. You can purchase new ones, or refurbished or used systems, which often come with comparable (or better!) warranties and service contracts. To find out more, contact Alex Silbergleit one of the experts at Atlantis Worldwide.  212-366-9100 x 190 or alex@atlantisworldwide.com