Around 275 B.C. Medical Imaging Was Born…Really?

We’ve come a long way, baby, especially when it comes to medical imaging.  But before we get to the latest and greatest in MRIs and CT Scans, let’s time travel, shall we? 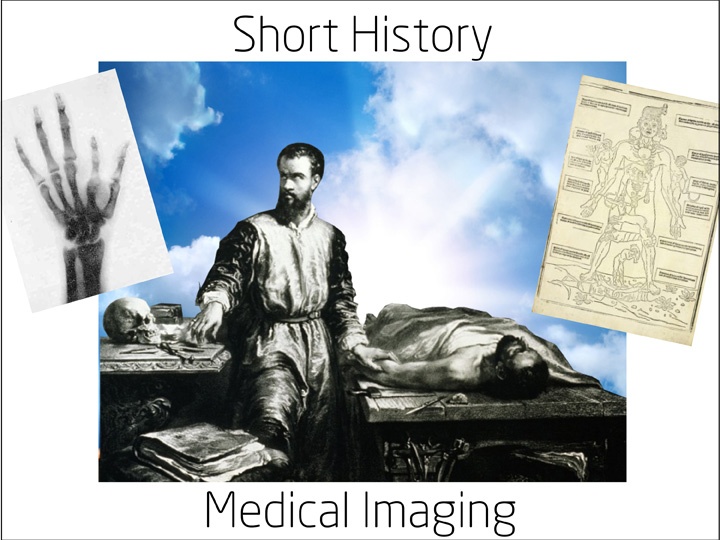 Way back in ancient Greece, around 275 B.C., the birth of medical imaging was taking place.  Alexandria was flourishing, and it was an exciting time for scientific and cultural exploration and discovery.  Once taboo, human dissections were finally permitted and a physician named Herophilus went to work.  He dissected hundreds of bodies and created detailed written observations.  While they were destroyed by fire in the Library of Alexandria, they were mentioned in later manuscripts by physicians and historians.

There was somewhat of a moratorium of human dissections until the 14th century, with the first printed medical book containing illustrations arriving in 1491.

Fast forward to 1895, when German physicist Wilhelm Rontgen happened upon X-ray technology while experimenting with an electron beam tube.  He noticed that a superimposed outline of the bones in his hand was capture on a nearby photographic plate.  He captured the Nobel Peace Prize in 1901 and X-ray technology has been evolving ever since.

We have plain film used in exams in dental and doctor’s offices.  There’s fluoroscopy, which provide a real-time moving image when a continuous x-ray beam bounces off ingested or injected contrast agents.  We have ultrasound, invented in 1942 to hunt enemy submarines.  It uses high frequency waves to create images.

Here’s a great story for you about MRIs.  An American chemist named Paul Lauterbur had a brainstorm while eating a hamburger at lunch.  It led to him using a magnetic field and radio waves to create images of actual living tissue.  He won the Nobel Prize with British physicist Peter Mansfield, who helped develop MRI technology.

Then there are CT scanners (computed tomography), which combine a circular array of detectors and a computer to provide detailed images of cross sections of the body.  Use a little software and you get detailed 3D studies.

While history is always interesting, let’s get down to business. Here’s a breakdown of what each medical imaging technology does best.

X-Rays:  X-rays are still a workhorse in medical imaging.  An x-ray is ideal for detecting pneumonia, looking for broken bones and the like.  It’s easy, inexpensive and the technology is plentiful worldwide.

Ultrasound:   Ultrasounds are ideal for monitoring the growth of a fetus, detecting a stone in the kidney or gall bladder or for viewing a beating heart.

MRI:  Magnetic Resonance Imaging uses a magnetic field and radio waves to create images of living tissues.  Hydrogen atoms in water molecules behave like small bar magnets.  By providing energy in the form of radio waves, these tiny magnets can switch orientation.  The strength of the magnetic field gives off a resonance frequency that can change predictably.   An MRI is ideal for imaging the spine, brain and musculoskeletal system.  You get great detail and no radiation.

Nuclear Medicine:  While research began in the late 19th century, it wasn’t until the 1980s that diagnostic machines were in use.  There are many techniques in nuclear medicine, including PET (positron emission tomography) and SPECT (single-photon emission computed tomography) with gamma cameras.  They are most commonly used in oncology to detect cancer and whether or not it has metastasized.

We’ve come a long way since human dissections and medical illustrations, and at the current speed-of-discovery, who knows what new technology is one the horizon.

If your clinic, facility, hospital or practice needs medical imaging equipment, be sure to talk to an expert before you decide what to buy.  You might be surprise that refurbished or used medical imagining equipment can actually suit your needs better than the latest and greatest technology on the market.  At Atlantis Worldwide, we can help you make the best choice, explain the benefits and show you the beefy warranties that protect your investment.  Contact Us Today!