There are nearly 40 million MRI scans performed every year in the United States, making it a true workhorse of medical imaging systems. 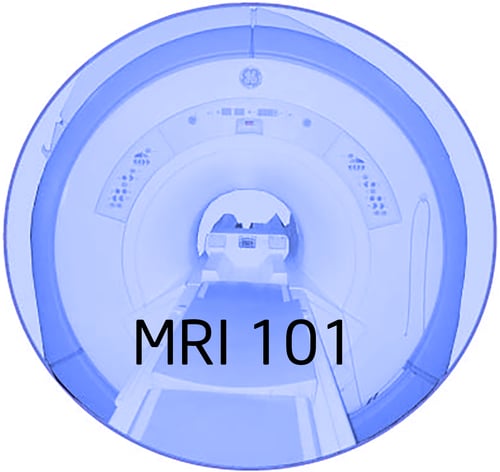 They also account for well over $100 billion in revenue. With so much at stake, it’s important to understand how MRIs work. Let’s take a look at the components of MRI equipment.

Tissue Magnetization: As the patient is placed in the magnetic field of an MRI, the tissue becomes magnetized temporarily because of the alignment of the protons. This very low-level effect disappears when the patient is removed from the MRI’s magnetic field. Because the normal and pathologic tissues become magnetized to different level or changes their level of magnetization at different rates, the MRI can distinguish between the different types of tissues.

Tissue Resonance: The MRI’s magnetic field causes tissue to “tune in” or resonate at a very specific radio frequency. Which is why the procedures is called Magnetic Resonance Imaging. The nuclei, typically protons within the tissue, resonate. In the presence of a strong magnetic field the tissue resonates in the RF range, which causes tissue to function as a tuned radio receiver and transmitter during the imaging process. Two-way radio communication between the tissue in the patient’s body and the equipment results in the MRI image.

Field Strength: Each point within a magnetic field has a particular strength or intensity. It’s expressed in either units of tesla (T) of gauss (G), with 1.0 T being equal to 10,000 G or 10 kG. At the earth’s surface, the magnetic field is relatively weak and has a strength of less than 1 G. For imaging, magnetic field strengths are the range of 0.15 T to 1.5 T.

conditions. Imaging usually requires a homogeneity (field uniformity) on the order of a few parts per million (ppm) within an imaging area. High homogeneity is obtained by the process of shimming.

Several different types of magnets can be used to produce a magnetic field, each with its own advantages and disadvantages.

A superconductor is an electrical conductor (wire) that has no resistance to the flow of an electrical current, which means that tiny superconducting wires can carry very large currents without overheating. This is typical of more conventional conductors like copper. Strong magnetic fields are made possible by the combined ability to construct a magnet with many loops or turns of small wire and the use of large currents. To achieve super-conductivity, the conductor or wire must be fabricated from a special alloy and then cooled to a very low temperature. The typical magnet consists of small niobium-titanium (Nb-Ti) wires imbedded in copper, which has electrical resistance and functions as an insulator around the Nb-Ti superconductors. The electrical current flows through the superconductor without dissipating any energy or producing heat. If, however, the temperature of the conductor should ever rise above the critical superconducting temperature, the current will begin to produce heat and the current will be rapidly reduced, resulting in the collapse of the magnetic field. This undesirable event is known as a quench.

A resistive type magnet is made from a conventional electrical conductor like copper. The name “resistive” refers to the inherent electrical resistance that is present in all materials except for superconductors. When a current passes through a resistive conductor to produce a magnetic field, it produces heat, which limits this type of magnet to relatively low field strengths.

MRI can be performed with a non-electrical permanent magnet, which doesn’t require electrical power or coolants—but this type of magnet is limited to relatively low field strengths.

Both resistive and permanent magnets are designed to produce vertical magnetic fields that run between the two magnetic poles. Possible advantages include a more open patient environment and less external field than superconducting magnets.

When an MRI system is in a resting state and not producing an image, the magnetic field is uniform or homogenous over the targeted region of a patient’s body. During the imaging process, the filed must be distorted with gradients. Think of a gradient as a change in field strength from one point to another in a patient’s body. These gradients are produced by a set of gradient coils contained within the magnet assembly. The gradients are turned on and off many times during an imaging procedure, which creates the noise that comes from a magnet.

Imaging magnets contain three separate sets of gradient coils. The coils are oriented so that gradients can be produced in three orthogonal directions (x, y and z directions). Two or more of the gradient coils can also be used together to produce a gradient in any desired direction.

Gradients are used to perform a variety of different functions during an image acquisition process. These gradients create the spatial characteristics by producing slices and voxels. All gradient echo imaging methods use a gradient to produce an echo events and signal. Gradients are also used to produce a type of image contrast (phase contrast angiography) for vascular imaging. They are also used as part of techniques to reduce image artifacts.

Gradient strength is expressed in terms of the change in field strength per unit of distance. These typical units are millitesla per meter (mT/m). The maximum gradient strength that can be produced is a design characteristic of a specific imaging system.

he gradient has to be able to change rapidly for certain function. The time required for a gradient to reach its maximum strength is called the risetime and the rate at which the gradient changes with time is called the slew-rate.

These are electrical currents that are induced or generated in metal structures or conducting materials that are within a changing magnetic field.

LOOK FOR PART TWO OF THIS MRI COMPONENT SERIES NEXT WEEK

Are you in the market for medical imaging equipment like MRI or CT Scanners? Talk to the experts at Atlantis Worldwide. For more than 30 years, we’ve helped hospitals, clinics, medical practices and urgent care centers find the medical imaging systems they need on the used or refurbished market. You’ll get the performance you want at prices that are kinder to your budget—and with great warranties!