MRI is the true workhorse of medical imaging devices. In last week’s blog, we took a first look at the components of MRI equipment. Let’s continue our exploration.

It’s not possible to eliminate all of the sources of inhomogeneities, so shimming must be used to reduce them. Some shimming can be done by placing metal shims in appropriate locations when a magnet is manufactured and installed. In addition, magnets can contain a set of shim coils, with shimming being produced by adjusting electrical currents in these coils. As a rule, general shimming is done by engineers when the magnet is installed or serviced. Additional shimming can be automatically done for individual patients.

The external magnetic field surrounding the magnet can be the source of two different types of problems.

Magnetic field shielding provides a more attractive return path for the external field as it passes from one end of the magnetic field to the other. This happens because air is not a good magnetic field conductor and can be replaced by more conducive materials like iron.

The RF system provides a communications link with a patient’s body so an image can be produced. All medical imaging modalities use a form of radiation (like X-ray, gamma-ray) or other energy like ultrasound to transfer the image from the patient’s body. An MRI process uses RF signals to transmit the image from the body. This RF energy is a form of non-ionizing radiation. When RF pulses are applied to the patient’s body, they are absorbed by tissue and converted to heat. The body emits a small amount of the energy as signals to produce an image. The RF signals provide data from which the image is reconstructed by the computer, because the image itself is not formed within and transmitted from the body. The image is a display of RF signal intensities produced by these different tissues.

Surface coils produce better image quality than body and head coils can. These surface coils can be in the form of an array of several coils or just single coils. Each has its own receiver circuit operated in a phased array configuration, which produces the high image quality obtained from small coils but with the added advantage of being able to cover a larger anatomical region with faster imaging.

RF energy is generated by the RF transmitter, which is applied to the coils and then transmitted to a patient’s body. A series of discrete RF pulses generate the energy. A transmitter consists of several components like power amplifiers and RF modulators and must be capable of producing high power outputs of several thousand watts. The RF power required is determined by the strength of the magnetic field and is proportional to the square of the field strength. That means a 1.5 T system would require nine times more RF power applied to a patient than a 0.5 T system. The transmitter has a power monitoring circuit, which is a safety feature that prevents excessive power being applied to a patient’s body.

After a sequence of RF pulses are transmitted to a patient’s body, the resonating tissue will respond by returning an RF signal. These are picked up by the coils and then processed by the receiver. The signals get converted into digital form. They are then transferred to a computer for temporary storage.

An RF system can operate in a circularly polarized mode or linear mode. Quadrature coils are used in a circularly polarized mode, consisting of two coils with 90 degrees separation. This will produce improved excitation efficiency by producing the same effect with half the RF energy or heating to the patients, as well as producing a better signal-to-noise ratio for the received signals. By surrounding it with an electrically conducted enclosure of sheet metal and copper screen wire, an area can be shielded against external RF signals. The principle behind RF shielding is that RF signals can’t enter an electrically conducive enclosure. However, the thickness of the shielding isn’t a factor. Even thin foil can serve as a good shield. However, the room has to be completely enclosed by the shielding materials without any holes whatsoever. In addition, the imaging room doors are considered part of the shielding and must be closed while images are acquired.

An integral part of any MRI system is a digital computer, which performs and controls the production and display of MR images. Here are the specific steps that are controlled and performed by your computer.

During the acquisition process, there are many repetitions of an imaging cycle. During each cycle, a sequence of RF pulses is transmitted to the patient’s body. The gradients are then activated and RF signals collected. It’s important to note than one imaging cycle doesn’t produce enough signal data or information to create an image, so the cycle must be repeated multiple times. The time needed to acquire images is determined by the duration of the imaging cycle or repetition time. This adjustable factor is known as TF. The number of cycles used affect the image quality, with more cycles producing better images as a rule.

The acquisition process is controlled by protocols stored in the computer and the operator can select from preset protocols.

During the acquisition phases, the RF signal data is not in the form of an image but the computer can use this collected can be data to “reconstruct” an image. This is known as a Fourier transformation. It’s a mathematical process that is relatively fast and usually doesn’t have a significant effect on the total imaging time.

The reconstructed images are stored in the computer, where the images can be used for additional processing and viewing. Your storage media determines how many images can be displayed or stored.

Your computer system controls the display of the images, making it possible for a user to select specific images and control viewing factors like windowing (contrast) and zooming (magnification). This allows the user to reformat an image or set of images or change the display in order to produce specific views of anatomical regions. Much post processing is performed on a workstation computer in addition to the computer system in the MRI system.

Does your hospital, urgent care, clinic or veterinary practice need an MRI system? If so, oftentimes a refurbished MRI system can provide the performance you want for a much lower price point. Talk to one of the experts at Atlantis Worldwide and see if this can be a solution for you. 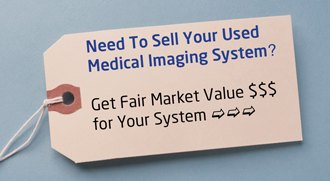