It's All About CT Detectors

Detectors collect information regarding the degree to which each anatomic structure attenuated the beam during a CT Scan Machine. 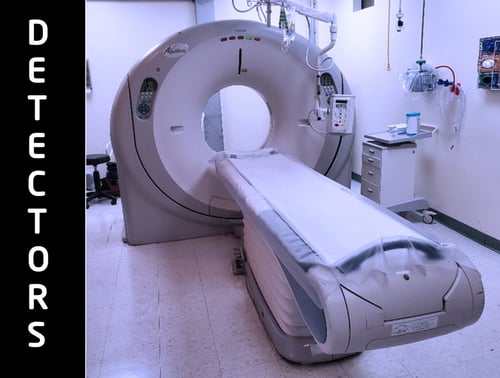 Instead of film to record the attenuated beam digital x-ray detectors collect the information in CT Scans.

“Detector” refers to a single element or type of detector used in a CT Scan system. It describes the entire collection of detectors that are situated in an arc or a ring in a system. Each measures the intensity of transmitted x-ray radiation along a beam that’s projected from the x-ray source to a particular detector element. There are also reference detectors within the array that help calibrate data and reduce artifacts.

The efficiency of a CT Scan system detector depends on:

There are several terms that describe elements of detector efficiency:

Xenon Gas Detectors use pressurized xenon gas to fill the hollow chamber to produce detectors that absorb 60-87% of the photons that reach them. Xenon gas is used because it can remain stable under pressure and is significantly less expensive when compared to the solid-state variety. It’s also easier to calibrate and is highly stable.

A Xenon Detector Channel consists of three tungsten plates. The xenon gas is ionized when a photon enters the channel. These ions are accelerated and amplified by the electric field between the three plates. This collection charge produces and electric current, which is then processed as raw data. The downside of xenon gas is that it must be kept under pressure. The major factors hampering detector efficiency are the loss of x-ray photons in the casing window and the space taken up by the plates.

Solid State Crystal Detectors are also called scintillation detectors because they use a crystal that fluoresces when struck by an x-ray photon. The photodiode is attached to the crystal and transforms the light energy into electrical (analog) energy. Individual detector elements are affixed to a circuit board.

Solid state crystal detectors are made from a variety of materials, like cadmium tungstate, cesium iodide, bismuth germinate and ceramic rare earth compounds like gadolinium of yttrius. Solid state detectors have higher absorption coefficients because these solids have high atomic numbers and high density in comparison to gases. They absorb close to 100% of all photons that reach them.

This is Part Three of CT Components.

If you have questions about CT Scanner systems or their components, talk to an expert at Atlantis Worldwide. We’ve been providing used and refurbished medical imaging equipment to hospitals, clinics, urgent care facilities, veterinary clinics and other healthcare practices for more than 27 years and would be happy to help you.